Establish an Office, Company or Shop in Japan

1.Decide the type of office.

3.Decide the place of office

4.Apply foreign company establishment in Japan to Bank Of Japan

6.Register the office to government (within 3 months after Bank of Japan approval)

｜ Internet and phone takes 1-2 months to settle down.

It takes usually 3 months from decide company name to open the office.

At the time of the office establishment, ABC HQ pays the establish fee and the working capital as ABC Japan’s capital. 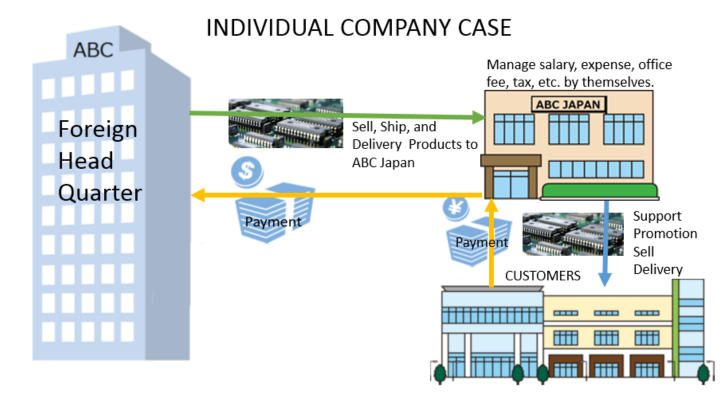 All the ABC JAPAN employees are the employee of ABC JAPAN and not ABC HQ.  ABC JAPAN get profit to sell distributors or customers and the profit use for all the payment such as salary, office, expense, tax and so on.  ABC HQ get profit at the time of product sell to ABC JAPAN.  ABC JAPAN struggle to manage finance within its profit.  When ABC JAPAN has excess money in the company, ABC JAPAN cannot move its profit to ABC HQ. 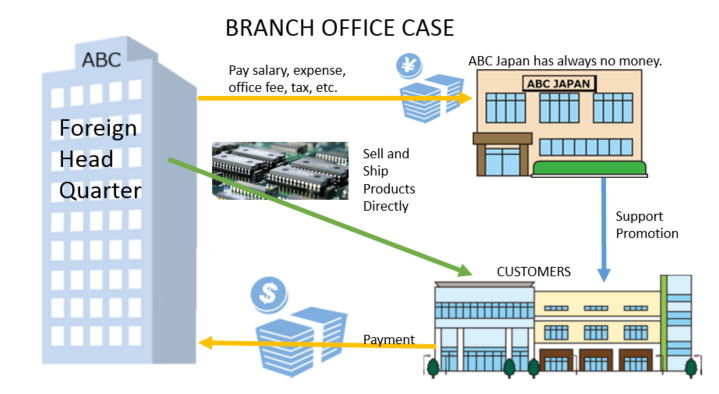 In Branch office case, register is needed but all the control is done by ABC HQ. So, ABC JAPAN isn’t independent.

Running fee for office like expense, salary, office charge, tax is paid by ABC HQ.  So, profit center is ABC HQ.  ABC JAPAN has no income and always negative finance.  Only work for ABC HQ and customer support.

When business type is decided, company name of JAPAN will be decided.  Then you will make some kinds of official stamps such as pictures.

Japanese real estate doesn’t wants to rent an office to foreigners.  Then ABC JAPAN will be a rental entity and someone Japanese needs to be a guarantor of ABC JAPAN.  And also at this time, you are not approved the investment by the Bank of Japan, the Japanese person will pay earnest-money to hold the office which called temporary contract.

You cannot start work for several months until you got permission of establishment from government.  It takes about for 3 months. So, you cannot get the office key until official contract of the office, and cannot buy any equipment. We just settled the address of the office.

But if you decide to use Servcorp or Regus for the first step of the office location, you can borrow a small office without Japanese guarantee person.  HQ contract is OK. And you can move to wide office or cheaper office if you need, after everything completed.

4. Apply foreign company establishment in Japan to Bank of Japan

Foreign company who invest to Japan needs to get approval from the Bank of Japan.  This application form needs to fill in new company address and capital (investment amount).

At this time, it needs to provide a document of your company’s certified copy of the registered file in HQ’s country government.  This is the evidence of ABC HQ is real company and filed in legal department of HQ’s country government.  But this application should be submitted by a Japanese agent.  And the application form needs to attach a document which ABC HQ appointed a Japanese person is a right person to submit this form and he/she is a delegate for it.  And also, the signature certificated by HQ country’s notary public is needed to attach it because the signature on the power of attorney for representation is real signature of ABC HQ president.

In Japanese law, before permission of the Bank of Japan, the foreigner must not invest to Japanese company, must not establish, and have not to work in Japan.  This permission is takes at least 30days.

In this period, you can only do for office preparation such like interior consideration, desks layout but you cannot buy any equipment in this period.

For the branch office case, bank open is necessary but not need capital payment.

6. Register the office to government (within 3 months after Bank of Japan approval)

You will submit the application form to Tokyo Legal Affairs Bureau with capital paid certification form from the bank, permission letter from the Bank of Japan, ABC HQ’s registered copy, a letter of attorney which you have a right to apply, and the signature certifications which the signature of the letter of attorney is not fake. These are the same documents which you need to prepare as the Bank of Japan.

You contract office officially after registration of the office. At this time, you should pay deposit or “right to use the office” fee to the real estate firm, the deposit is very different by case by case, it is from 3 months of the office rental fee to 3M yen.  And also we need to pay advance of office rental fee for three months usually. Share office doesn’t need this kind of fee.

Finally, you can buy desk, chair, partition, and apply internet and telephone.  Phone and Internet takes 1-2 months to settlement from apply.  Most of these payment are used by the capital if its value is equivalent to the money like desk, chair like that.  But consumed payment like office rental fee, phone charge, internet fee is not remain as value cannot be used by the capital, this is operation fee of the company.

Then you open the office and start working.

If you are individual person, and you wants to open a shop or design office, IT company by yourself such like SOHO, it is not the same procedure.  Please contact us to establish in Japan.

Please write a mail to us for any questions.